Disclosure:-Free copy of  Anand Neelakantan's "The Rise of Sivagami" was received from Westland publishers for review. 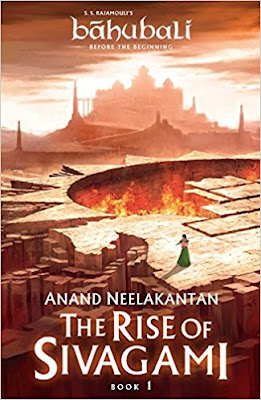 The book seems to start from a early era ( not depicted in both the parts of Bahubali movie) and deals with the story of Sivagami - A girl who is orphaned because of the kingdom who goes all her way to avenge for her father's death.

The book deals from the phase where the girl moves from the village, deals with the adversities in her journey and moves on till she gets into a platform towards her life's mission.This story seems to set the foundation  for Part 2 and more in the series ( in a way creating a needed suspense for the next books in the series).

Apart from the main story line of Sivagami, there are various sub plots that deal the Kingdom of Mahismathi- the king, prince, slaves, minister, pirate, merchant,rebels and other interesting characters. Whether the kingdom/ king is evil or good, who is right , who is wrong, are vaikalikas the real villains, whats the kingdom's biggest kept secret?... these questions/plots keep the readers hooked to the story and make this book a page turner. While some of the questions are either fully or partially answered, some of these remain unanswered and are kept open - to be dealt with in the next books of the series.

This is first book of Anand that I have read. I am quite impressed with Anand's story telling abilities. He introduces a lot of characters, portrays them perfectly, uses them well in the story and takes the sub-plots cohesively to one direction.

Overall, if you are a avid reader of historical fiction, this book should definitely impress you. (Even if you have not watched any of the Bahubali movies)

" A Ship is safe when it is in Harbour, but the ship was not built for that"

These are just opinions/ ideas exchanged. No one can claim us responsible for any investment failures /losses based on the ideas expressed here.

Feel free to mail your queries/ comments to ideas.money@gmail.com

Latest on other blogs